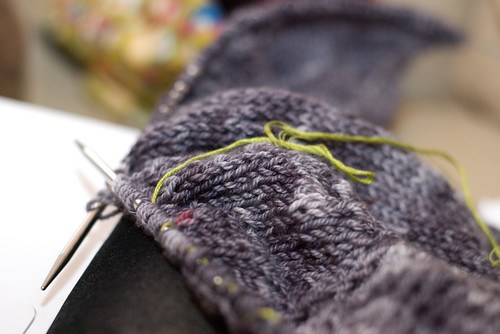 *sigh* still in progress. {Here’s my project page on ravelry}  I finished the stockinette portion a few days ago and had started on the lace part.  Um, then around row 5 of the lace, I was way off the stitch count.

I tried to un-knit to my mistake point, but that didn’t work.  (As a side note, I learned from the inter-web that the knitting term for un-knitting is tink.  As in knit backwards.  Who knew?)  I had inserted a lifeline, which is the green embroidery thread in the photo.  BUT the lifeline threaded itself partway out while knitting.  So much for the lifeline, eh?

I debated ripping the entire thing out.  (ripping = frogging according to the inter-web.  as in ‘rip-it, rip-it’.  Who knew?)  I ended up inserting the needle along the lifeline, winging it where there was no thread, and frogged (ha!) to the needles.  Only losing an evening of knitting instead of 2 weeks worth.

Its not perfect, and I’m ok with that.  The yarn is lovely.  The pattern is fun.  I’m enjoying it.