Whew.  Well, its been a week since the Marathon and I’ve been busy since.  Sorry for the delay in posting this race report.  I actually drafted it earlier this week while sitting in a waiting room.  Just now getting around to typing.   You know, I’m really tired.  And I won’t go on and on about the race.  Just hit the high points. And a photo.

Again, Chicago puts on a great race.  Gobs and gobs of people running, volunteering, spectating… its pretty cool to do something this tough, and this hard with 40,000 other runners.  My second time running and it was almost exactly like 2008!  I didn’t exactly have a strategy, or even a time goal.  I just knew that I needed to eat early and often and to drink mostly Gatorade the first half.  My Garmin didn’t do so well in the city with the big buildings and all, so I didn’t have a clue as to what my pace truly was.  I just knew that I was feeling good, not pushing it.

You might not really believe me when I say this, but I enjoyed running this race!  The city is amazing, the crowd support is unbelievable!  The bands, the noise the signs!  It was entertaining.  The weather was a bit warmer than I wanted (creeping up to the mid-80s) which definitely affect my race from mile 18 on. I think that was when I started walking the water stops (as opposed to jogging through them earlier).  Which slowed my pace considerably, but you know, I met my goal. 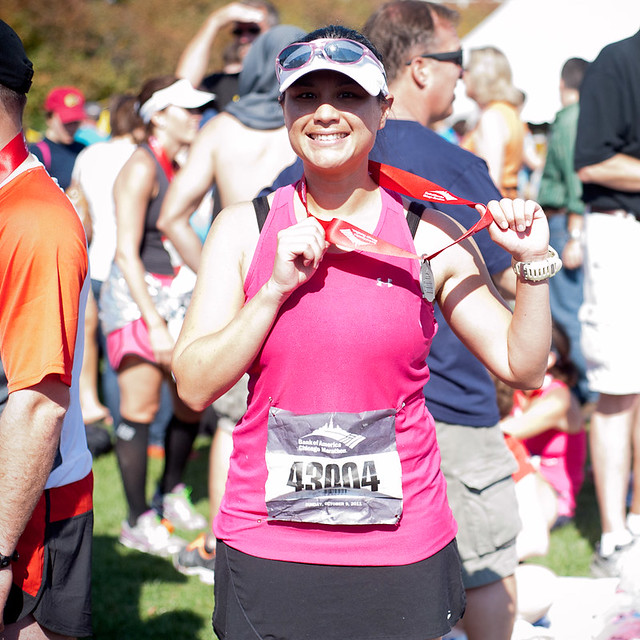