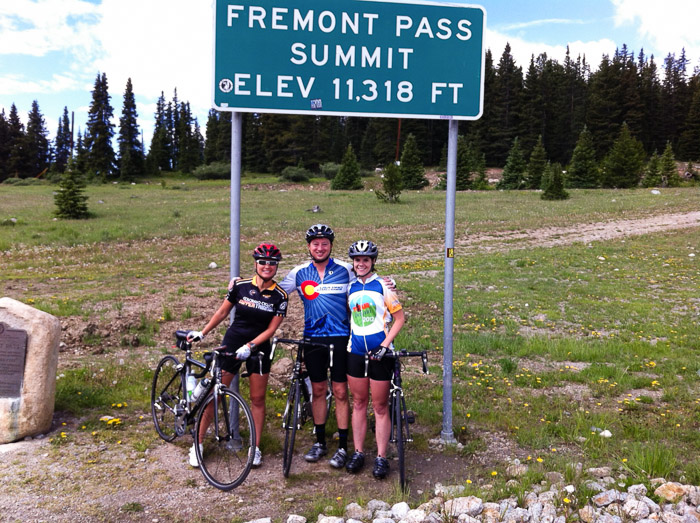 “I really need to bike more.”

I say that to myself every time I finish a road ride.  An honest to goodness, put-the-bike-shorts-and-helmet-on bike ride and not a lets-be-bop-around-the-neighborhood bike ride. And its sad, really, that I’ve only actually been on my road bike a handful of times this year.

What’s especially sad is that I’m signed up for a lung and leg busting cycling event in 3 short weeks, and I’ve still not made cycling a priority. You’d think that after doing this same event twice now that I’d have learned my lesson and biked more. But no.

I recently ventured west with some friends to ride part of the Copper Triangle course – Mountain Pass #1 Freemont Pass.  We rode from Copper Mountain to Leadville and back. And it was just as pretty and just as hard as I remembered. Especially the return trip up Freemont pass.

I thought for sure I was going to throw up.

My strategy, when the climbs are tough, are to count revolutions. 1 to 100 (“that’s a lot!”) over and over and over. I wish I could say that it made the climb easier.

Do I really want it to be easy though? I’m not going to lie to you, I like that its tough.  I like knowing that I can actually do this – bike up a few mountain passes.  When I first moved to Colorado, I saw cyclists going up mountain passes. And I remember thinking, “That’s just f*ing crazy. No way would I be able to do that. I can’t even breathe.”

I am physically capable of so much more than I realize. And I don’t want to take for granted my ability and capability to be out there in the hills.  One day I won’t be able to climb a mountain.  But today is not that day.