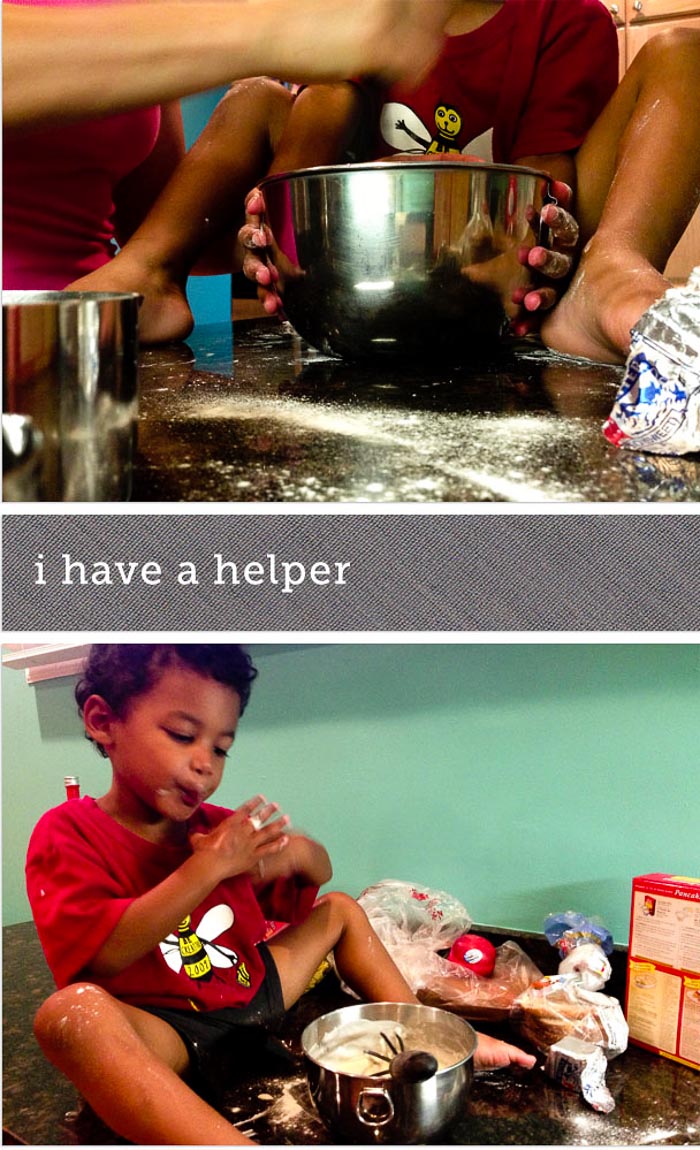 Sunday began with some help making pancakes. Which, can I just share this?  Miles ate four. Four pancakes. And he refers to himself in the 3rd person. And his inflection makes everything a question. Its totally adorable.

Anyway. The stool. Miles uses it to get up on the counter. He knows that the “black stool”, if its not in the kitchen, is in my closet and will go and drag it out when he wants to climb up onto the counter.  He also has figured out how to climb up the trash can to get up on the counter (or to grab some graham crackers from the pantry) but I try to discourage him from doing that.  Note that I said “try”. So, here’s Miles helping me “mix-a mix-a” the pancakes Sunday morning.

He likes to stir the batter. He likes to watch the butter bubble in the skillet. He likes to count out how many pancakes I pour and flip.  He also really likes to eat the pancakes. See above. Four! I’m still kind of in disbelief that he ate four! Seriously, Miles barely weighs 30 lbs – where does he put four pancakes??!!

My little guy is really cute right now. And I’m having so much fun with him right now. I’m enjoying him being small enough to sit on the counter yet he’s big enough to climb up all by himself. He won’t be this small or this adorable forever. I know he won’t always want to help “mix-a mix-a” the pancakes. I’m writing this, hoping that I’ll always remember his adorable-ness and how he asks a question even when he’s not asking a question. I hope that I’ll especially remember that when he wakes me up at 0640 on a weekend, saying “Miles want to eat?” that these days go so quickly. Much sooner than I realize, he’ll be old enough to make his own pancakes.  And I don’t want to think about how he won’t need me as much.