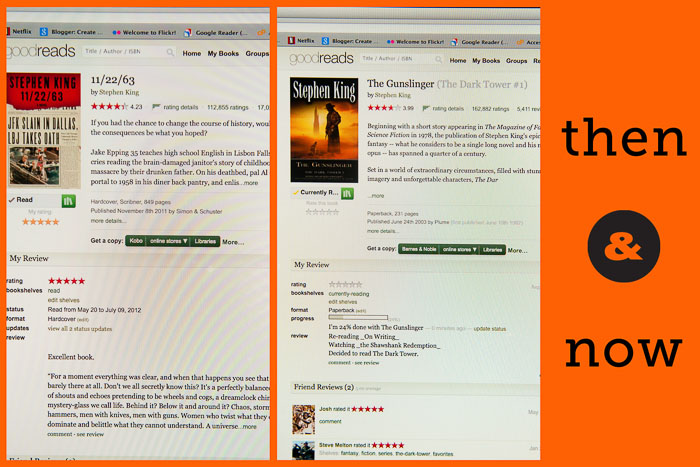 “The man in black fled across the desert, and the gunslinger followed.”

A perfect opening line, in my opinion. I’m currently only about 5 pages into Stephen King’s The Gunslinger, so I don’t have much to else to say about it. Except that King definitely has my attention.

A few things led me to hit <buy> on my kindle. I recently started re-reading King’s memoir/instruction manual On Writing and The Shawshank Redemption was on TV last night.  A coworker is a Stephen King fan, and we’ve discussed many times his different books and what we like and don’t like about them. My coworker has talked about The Dark Tower series on a number of occasions, so I thought I’d go ahead and start.

Side note: I’m also a huge (huge) fan of the television series LOST, and I know that the show writers were huge (huge) King fans. Lets be honest, my love of LOST is why I love the opening line of the Gunslinger. “Hi there, Man in Black” I imagine that I’ll see some of the Dark Tower influences in LOST as I go along. And that intrigues me.

I love reading. Have for as long as I can remember. Growing up, Mom would take us to the library all the time. We’d check out crates of books – literally. My sister and I each had a milk crate that we’d fill with books to take home. Each summer we would read a record number of books – and not just for the free Pizza Hut Personal Pan pizza (anyone else remember the Book It! program??).

What was shouted in the house before dinner? Not “Turn off the TV and come to dinner!” It was “Put that book down and eat!”

My parents read a lot too, and I’m sure that seeing them read books influenced us as well. And as a parent, I hope that I’m influencing Miles. We read every night to him. One, two sometimes three books.  He definitely has his favorites – The Very Hungry Caterpillar, One Blue Fish, Otis and some others – and he does like to “read” to us.

So, back to The Dark Tower Series and Stephen King. A year ago, I had just finished 11/22/63. What a story. I absolutely loved the book. And the characters. And the story. However, for all the things King does well, I have a major problem with how he ends his stories. (re: Under the Dome // see: Deus ex machina // me: frustrated) I’ll give The Gunslinger a chance. If I move on to The Drawing of the Three, then you’ll know where King stands with me.